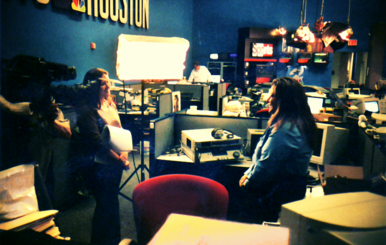 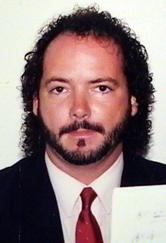 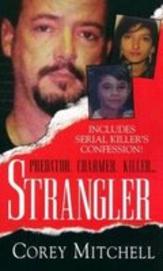 Story of a lifetime...

I am often asked what is the biggest story you have ever covered? Over my 18

year career I have been part of many stories. A nature of the beast of being

comes through the newsroom. Days such as the Terror attacks on September

11, 2001, Hurricanes Ike, Rita and Katrina or countless local stories that

involve tragic or bizarre events will be forever ingrained in my mind.

is the Anthony Allen Shore case. It started with just a simple phone call to the

assignment desk. I have answered phone calls with story tips a countless

number of times, but never like this before. The story started on a hot typical

July day in 1994. It did not end until 10 years later when Shore was arrested.

I talked with Shore on the phone for 37 minutes to be exact. He conveyed to me there was a serial killer on the loose. He told me where I could find a body, proceeded to tell me how the body was laying and how the victim was killed. He never gave me his name or admitted to the killing, but I knew I was speaking to the killer. Shore was using me but I did not know it at the time. He had given me five facts of different murders. Such as a date of birth, a nickname or a piece of jewelry a victim was wearing. Needless to say Shore is an evil man and took the lives of several women.

I was able to testify for the Harris county DAs office and former prosecutor Kelly Siegler  at his trial. Shore is  on Texas death row awaiting his execution. For ten years, I would stop every now and then because I thought I heard his voice or a bump in the night he would creep into my mind.

The best part of the story is that I became close friends with many who worked the case.  Detectives, prosecutors, FBI profilers and members of the joint agency task force, I will always consider them my friends.

The Shore case has been featured on A&E’s “Cold Case” program. A book has also been penned about the case. Another book is now being written. Countless articles and Web sites have also told the Shore case. To this day, he is still being looked at as a suspect in other murders.

For me, I sleep at night knowing he is locked up. I sometimes think of his victims, especially Dana Sanchez. I had worked her case days before Shore called me with details on where to find her body. Dana had been a reported missing teen and we did several news stories on her. I can still hear her Mom’s testimony, " all I wanted was better things for my daughter,... the American dream".

Back to the Top

Here is an unedited version of the Prologue from, Coerey Mitchell's book,  Strangler, about

“There’s a serial killer out there.”

The male voice on the other end of the Bat Phone spoke calmly. Twenty-three-year-old Barbara Magana, morning Assignment Editor for NBC television news affiliate KPRC, listened to her end of the telephone with only half an ear. Her job was to monitor the police scanner and answer phone calls for any possible stories and then assign them to reporters to air on the evening news at 6:00 p.m.

While many of her co-workers left for lunch, Magana had answered the Bat Phone, which was used as an emergency tip line. Everyone who called the tip line claimed his or her call was urgent. Usually, they weren’t. Most of the time they were simply reporting an automobile accident or a purse snatching, all too common occurrences in the fourth-largest city in the United States.

At first, Magana only partially listened to the caller. Another nutcase she assumed. “How do you know?” she responded.

“I’m going to tell you where you can find a body,”  the man replied rather nonchalantly.

“Tell me where I can find the body,” Magana requested in an almost sarcastic tone. She was not convinced.

The caller, however, did not hesitate. He began to describe a location just north of Houston, near the George H.W. Bush International Airport, named after the 41st President of the United States and pseudo-Texas citizen.

Magana patiently wrote down the directions but did not understand where one of the streets was located.

The man had been referring to the Richey Road off of Interstate 45 in north Houston. The caller was getting tired of Magana’s inability to take dictation and let his frustration be known. “No, listen to me. I’m going to tell you exactly where it is.” He was adamant that she do everything perfectly.

After the man snapped at Magana, her demeanor visibly changed. This was not some fruitcake after all she realized. This guy was the real deal. She was on the phone with someone who knew where a murdered corpse lay.

The man proceeded to give Magana a precise description of the location of the body. “Take I-45 until you hit the Richey Road exit. Turn right and head up until you come upon Northview Park Drive and turn left. Go all the way to the end of Northview Park where you will come to a dead end sign. You will find the body lying in some tall grass. Some tall weeds.”

Magana instinctively reached for her Houston Key Map guide to find the location. She used one on her job all the time.

As if by some unknown force the caller informed her, “Don’t go for your Key Map. You won’t find it. It’s a brand new subdivision. It’s not on a Key Map yet.”

Magana was completely freaked out. How did this caller know she was reaching for her Key Map? Is he watching me? She started to feel the rush of adrenaline that surges through your body brought on by anxiety, fear, and excitement. She wondered if the caller was more than just a witness.

“You can use your chopper to find her. She’s lying face up and your chopper should be able to spot her rather easily,” the caller referred to the Channel 2 News helicopter which is often used for live coverage.

Magana’s journalistic instincts kicked in. She was determined to not let this man get off the telephone. “What can you tell me about the victim?”

The man did not hesitate and began to describe the victim. “Her name is Ruby. She was born on May 11th. She is wearing several gold rings on her fingers. She is fifteen years old.”

Magana wrote furiously as the man recited the information. She sensed that he was wrapping up the conversation so she decided to ply him with one more question.

“Am I talking to the killer?”

There was only silence punctuated by short drawn breaths on the other end of the phone.

“Am I talking to the killer?” Magana asked again.

Again, a breath. And then a small laugh. The phone went dead.

Magana hung up the Bat Phone and glanced up at the newsroom clock. 12:37 p.m. She had spoken to the supposed killer for thirty-seven minutes. She logged the call in the company book and then kicked it into high gear. She started by looking up the address of the alleged body dump. In her mind, Magana kept thinking of nearby Pasadena, but she eliminated that thought from her head and focused on north Houston. She knew she needed to call the authorities, however, she was not certain of the jurisdiction where the body lain. She had to determine if she needed to call the Houston Police Department (HPD) or the Harris County Sheriff’s Office. She was able to pinpoint the location as just outside of the city limits. Magana picked up a different phone and notified the Sheriff’s Department of a tip about a possible murder victim.